What is the Christmas Plant Name?

The bright red bracts of the Poinsettia plant have long been associated with Christmas -- in fact, it's more widely known as "The Christmas Plant" than by its botanical name, euphorbia pulcherrima. Most people are familiar with the sight of this plant because it's widely used as a decorative accent during the holiday season, but they know little about its origins or how it came to be associated with Christmas. Following are some interesting facts about the plant most people t

Poinsettias in the Wild

Poinsettias are native to the very southernmost tip of Mexico, and their name is derived from 19th century amateur botanist and first U.S. Ambassador to Mexico Joel Roberts Poinsett. Poinsett first documented them in 1828 and brought some back to his greenhouse in South Carolina. He sent one of the plants to botanist friend John Bertram, who began propagating them commercially as cut flowers. It wasn't until the next century that they gained renown as a classic holiday fixture, though, and that wasn't until Paul Ecke Jr. sent potted Poinsettia plants to Hollywood TV studios as seasonal gifts. They were featured on programs such as Bob Hope's Christmas specials and The Tonight Show, and a tradition was born. 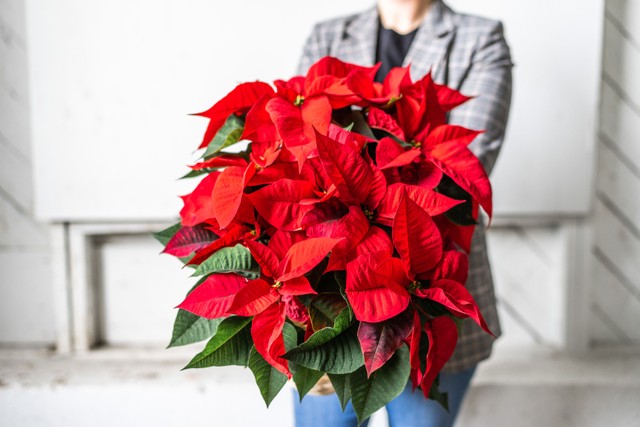 There's a Mexican legend that says that a small girl was on her way to visit the baby Jesus and had no gift to bring, so she grabbed a small handful of roadside weeds. When she knelt before him at the altar and held out her offering, the weeds suddenly blossomed into vibrant red flowers, and those in attendance were convinced they'd witnessed a miracle.

Contrary to common cultural lore, Poinsettias aren't poisonous. Studies show that an average-sized child or pet would have to ingest more than 500 Poinsettia leaves in order to experience any ill effects such as nausea or vomiting. Another misconception is that their bright red color comes from flowers -- these are actually bracts, which are a type of leaf. Poinsettias also come in white and pink.

Other holiday favorites include Christmas Cactus, Red and White Orchids, and, of course, good old Christmas trees. Shop all Christmas plants for delivery to your home, or as a wonderful holiday gift.